At the National Show and Sale Dinner in Dubbo, Angus Llewellyn was awarded the 2017 JRA Ambassador Award.

Angus is from Keith, South Australia and has his own Red Angus Stud, Jillangus which has been in operation for 7 years. As well as working with his own stud, Angus also helps out on the family farm which is a commercial herd of mainly Red Angus cows, merion ewes and first cross lambs as well as cropping lucerne.

He attend local and Royal shows as well as heifer shows to further gain experience and knowledge within the industry.

Angus is one of the founding committee members of the Junior Red Angus Committee. He is passionate about the Red Angus breed which he loves ‘mainly becuase of their diversity….They have a great temperament, calving case as well as great growth rates and muscling.

Angu’s greatest achievement to date within  the breed is winning Senior Champion Bull at the 2015 Royal Adelaide Show with his own bull Jillangus Jupiter. 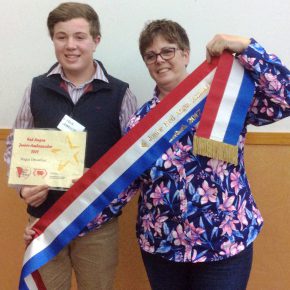