Junior membership is a restricted membership category to enable youth to commence breeding Red Angus and/or participate in self-development programs.  Junior membership shall be accepted up to the age of 25 years old.  In the case of an application under the age of sixteen years, a Full Financial member shall countersign the application form. The counter signature shall be regarded as a guarantee by that member of the fees payable to the society.

Junior members who wish to register cattle will be required to record a prefix and tattoo with the Society. Junior members are restricted to 10 head of female cattle unless Council grants excemption.

Many schools across the country are using Red Angus cattle in their education programme.

In late 2015 a Junior Red Angus Committee was formed.

The Committee consists of:

The Red Angus Society of Australia Inc. promotes the involvement of junior members in the beef industry. As part of this encouragement, junior members can apply for a Junior Ambassador Award.

The inaugural winners of the Youth Awards were Stuart Hobbs, Molong NSW and Jessica Mackey, Crookwell NSW.  Stuart and Jessica attended the SA Junior Heifer Expo as Red Angus Youth Ambassadors and had the opportunity to increase their knowledge as well as network with other Red Angus members.

The 2016 Red Angus Junior Ambassador was Isobel Robertson. Isobel is 16 years old and is from Fishington Red Angus, Wongwibinda NSW.  Isobel was instrumental in establishing the Fishington Red Angus Stud. Isobel likes showing and competing because you continuously learning new things from people, studs and others in the beef industry. Also a hand on experience is a great way to learn new skills. A keen photographer, Isobel’s image won the 2016 Red Angus calendar competition. Isobel believes that participating in Youth Camps are a great way to learn about the beef industry. In the near future, Isobel is currently working on an AI program and collecting data for Breedplan. Isobel loves working with and showing cattle and hopes that this passion allows her to extend it to her career path in the future. 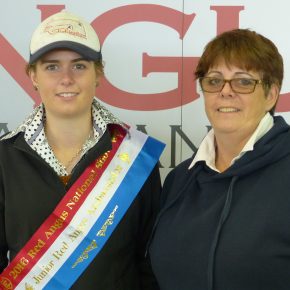 Kirrily Johnson-Iseppi GK Red Angus commented “Its actually good for juniors to do those jobs like Chairman and treasurer, it teaches you book keeping and how to run a meeting and those things come in handy. The other thing about the junior movement is it gives you contacts all over the world and you can travel, its good that way, you can usually find someone you have something in common with all over the world.”

Junior members have won prizes at Royal Shows and Heifer Shows which has allowed them to travel and represent their State and the Red Angus breed on a national level. Others have won trips overseas to further their interests within the industry. Many of the winners have gone on to become leading industry identities.