Friday 5 with a Council Member!

Today’s Council Member we’re featuring is Daryl Schipp. Daryl is a former Red Angus President, and re-joined as a Council member at the AGM earlier in the year.

Who are you and where are you from?

We farm 950 ha just east of Wagga, running around 450 – 500 head of cattle which includes 100 stud Red Angus Cows and followers, together with a Stud Poll Hereford herd and growing out steers.

I established Schipps Red Angus in 1993 and became a Councillor first time around in 1997 and was President for 4 years in early 2000’s.  I have an Economics Degree and have taught part-time at NSW TAFE Dip, Ag. Level for around 20 years. Now back on Council in 2020.

While the cattle are great and should be much better represented in Australia’s cattle herd, the best thing about our breed is the people involved and the unity of purpose to advance the Breed.

What developments would you like to see in Red Angus in the next 10 years?

Without doubt the next 10 years need to see the breed make huge expansion in the northern areas of Australia where the Red Coat has natural advantages.  Cattle Breeders also need to be able to access Red Angus Genetics and as a Councillor I applaud people like Craig Gapes and his team at ‘Power of Red Sale’, Graham Jordan and David Croker for developing the innovative concept of the Feedlot Trial and sale at Armidale. David Hobbs for his passion with the National Sale to give smaller breeders a market, Cliff Downey inaugurating a commercially focused sale in Northern Victoria and all other members for their efforts in promoting the breed.

What are the benefits of being part of a breed society?

When members of a breed society work together – anything is achievable

Favourite cut of meat and/or meal?

BBQ T-bone steak, thick and juicy with a good beer. Although I do like a good seafood bouillabaisse with crusty bread with a good wine.

Thank you Daryl for your time. 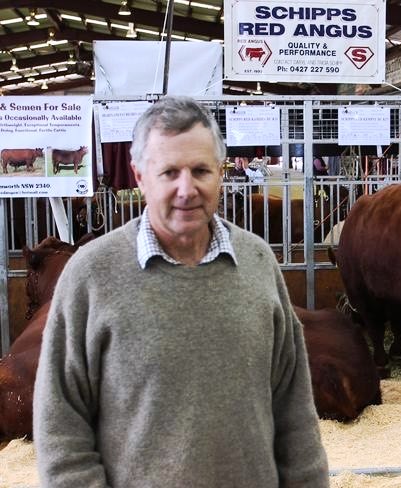