Red Angus have performed well in the Sydney Royal Carcase Competition.
Reserve heavyweight champion went to a Red Angus steer exhibited by Kinross Wolaroi School, Orange and bred by Jason Tom, Parkes, that was sired by Hobbs Livestock None Better.
With a score of 93 points it was the second highest scoring carcase of the entire competition. It was purchased by NH Foods – Wingham Beef Exports.
A Limousin/Red Angus cross steer from Macarthur Anglican School, Cobbitty, has won champion trade carcase.
Bred by Mick Rawsthorne and Tony Marcochi, Cobbitty, it scored 92.1 points.
With a liveweight of 461kg, a top trade carcase had a carcase weight of 272.4kg, a dressing percentage of 59.1 per cent, P8 fat depth of 7mm and rib fat depth of 5mm and a rib eye area of 99 sq cm.
It measured a marble score one, had a MSA Index of 57.2 and received the only gold medal of the competition.
CLICK HERE to read the full story from The Land
The reserve heavyweight champion steer 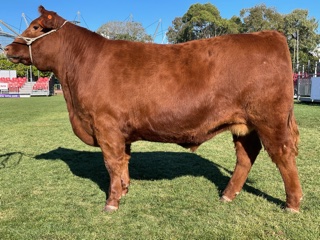